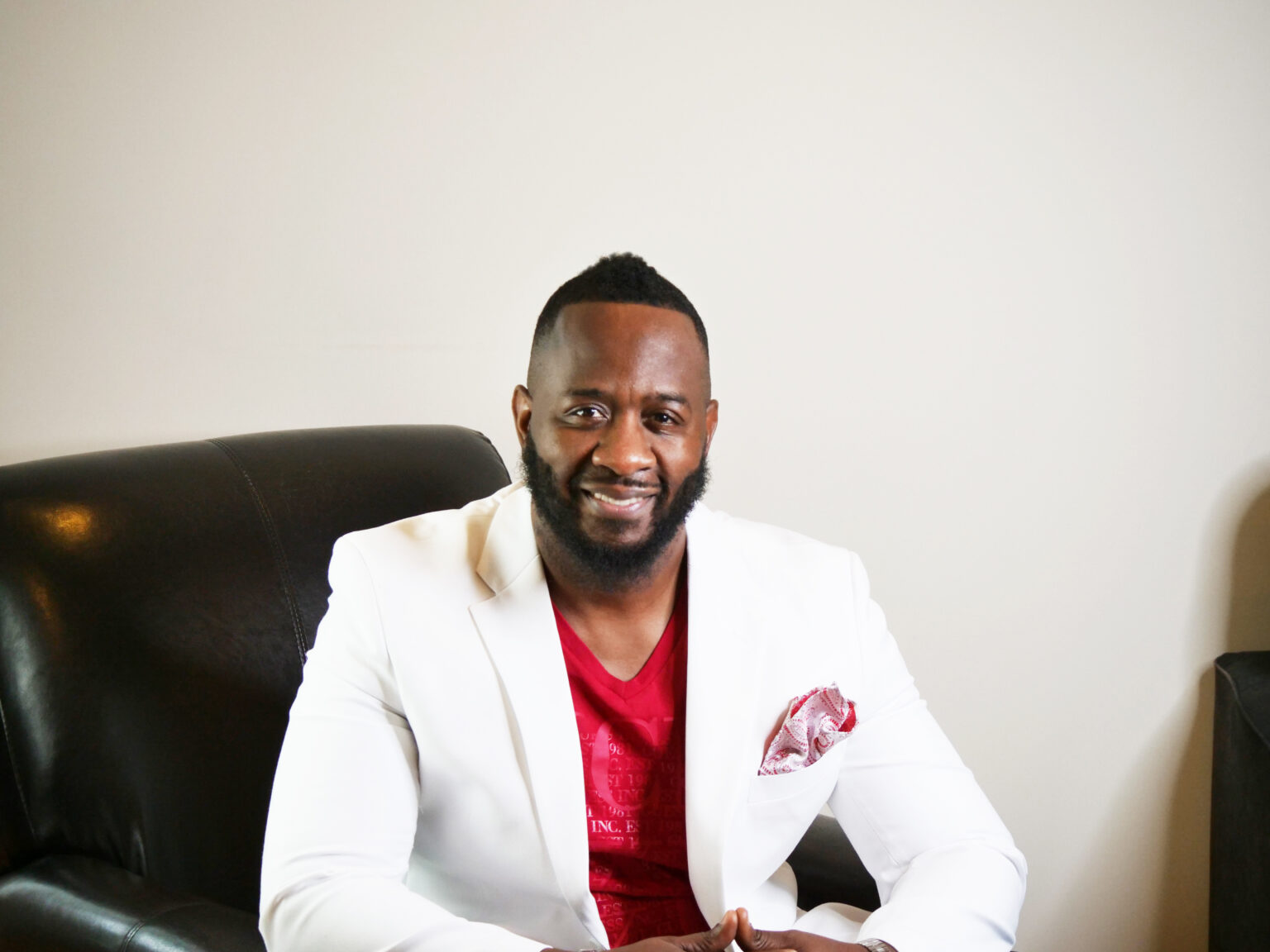 From 1992-1995, I suffered a severe mental depression that caused me to want to give up on life. Due to my wild uncontrollable & undisciplined behaviors as a teenager, it caused me to not take school or life seriously. This eventually led to me not graduating from high school which began my 3 year mental and emotional depression.  All the negative emotions I was feeling led me to live a horrible life of hopelessness, insecurities, self hate, low self esteem and addictions. The words of someone I looked up too when I was young began to hunt me “without a high school diploma you will be nothing”.

Believing this made me feel useless and I remember without any other hope or answer I prayed and said God if you are real give me hope before I take my life. Then it happened, God gave me a clear vision of me helping many people, which fueled my pursuit of Him and purpose in life. After receiving this vision I immediately broke free from depression and began my personal growth journey (Please note there is much more to this story). I began to discover the many talents I possessed and began to inspire and encourage  others to find the talents they possess. This desire led me to pursue my self taught musical career as a gospel musician and artist which has allowed me to learn and play multiple instruments as well as accomplished & produce 12 albums and played for many artist and events. I have linked for you a gospel track that I composed, produced, mixed, mastered and played every instrument all by myself. PLAY TRACK This passion for music has led me to began sharing what I have learned through private music lessons, classes, camps, workshops & retreats. Doors opened more for me to teach music to private schools, state programs, community programs & conferences. Then as a young man I began to find passion in sharing my testimony of my personal growth journey which has opened doors for me to speak youth, women & men of all enthnicities. I became a licensed minister in 2005, then an ordained elder in 2011, and in 2015 I became a certified life coach with the American Union of NLP. The goal of my company is to help as many people discover their purpose, passion and value in life and to train as many upcoming musicians, producers and songwriters how to create and play professionally. Through my years of training I can definetly guarantee you that the systems I use for learning music quickly and to help you grow personally will transform your life. Whether you just want one on one help or you need help in your company staff retreat or event I am looking forward to working with you. You may view more about me at www.nathansalter.org

Entrepreneur / Music & Life Coach
Nathan operates multiple services for many clients of all kind. He is the owner of Salters House Coaching, LLC. Over 1000 students and clients have been impacted by Nathan’s music and programs. Many of his students are now successfully playing, touring, recording and now teaching others. If you desire to music lessons and coaching from Nathan click here.

In 2015, he has received his certification as a Professional Life Coach with the American Union of NLP Associations. Nathan’s area of coaching expertise is in the area of PURPOSE DISCOVERY. Since his certification, he has been the keynote speaker for many empowerment events & retreats. He now has many clients that he coach helping people to discover their life Purpose. He has launched his new “Purpose Parties” which allow small groups to meet with Nathan to receive powerful coaching and motivation.

Author
Nathan released his first book “7 THINGS SINGLES SHOULD ACCOMPLISH BEFORE MARRIAGE” in 2012, which is becoming one of the most talked about books for Singles. This book has given him many radio interviews and TV Appearances sharing on his practical information that is helping so many singles. In 2016 he has published his second book “BEAUTY HAS NO BOUNDARIES” which is changing the lives of many who struggle with low self esteem & insecurites. Nathan will soon be releasing a series of new books.

Motivational Speaker
Through the many things Nathan experienced in his life, one of his passions is to motivate people to Think Outside the Box, Celebrate their Uniqueness and to Pursue their Dreams. He loves to share his story on how he moved from being Depressed as a Teenager to becoming a successful and happy man. His story will captivate the listener to make them know Nothing is Impossible to them that Believe.

Minister / Clergy
He serves as the pastor and founder of Fuel Station Church which remains under the spiritual cover of Bishop Robert L. Sanders, Jr and The Greater Refuge Temple of Christ Church in Buffalo, NY where he has served faithfully since 1992. Nathan operates in the Five fold ministry gift as a Teacher & Pastor. He was ordained as an Elder with the Churches of Our Lord Jesus Christ of Apostolic Faith in 2011. He accepted his call as a minister in 2005, and is currently a well sought after speaker. He is in high demand to share his practical messages to the body of Christ.

Songwriter / Recording Artist / Music Producer
He began to share his talents, by recording several music projects. GIVING MY GIFTS BACK TO GOD, PEACE THAT PASSETH ALL UNDERSTANDING, BREAKTHROUGH IN HIS PRESENCE live CD/DVD, NARROW WAY Live CD/DVD, NO ONE ABOVE YOU live and his most recent Single SHOW HIM A SIGN. His diverse and very unique style of music has caused him to travel far and wide blessing many, of all ethnicity, with his awesome concerts. Nathan’s popular song “I WONT WORRY”is being sung in churches all across the world. To enjoy many of Nathans music click here.

CEO / Visionary
He felt a call on his life to begin to impart his musical and spiritual gifts into the next generation, which lead him to birth SALTER’S WORSHIP CAMP, which is a week long event that trains youth to become the Worshippers they were created to be and to use their gifts to worship and to lead others to Christ. The camp is now impacting the world through his salters worship missions camp which offers opportunity for those who desire to share their gifts in other countries.

Musician
His career as a musician began as a drummer. Through his many exposures he began to develop as an accomplished drummer, playing for several groups and artist. He then began to have a heart felt desire to express the songs he heard within him which led him to the piano. He began writing his own music and shortly after, began to produce albums. Many became amazed at his fast ability to learn multiple instruments and began pursuing training from Nathan, which led him to music coaching & lessons. He is now and accomplished Organist, Pianist & Drummer and plays with passion and soul. Nathan currently offers services to play Piano/Drums for Studio sessions, Life recordings, events, church services, weddings, funerals and banquets. He has been a part of being the music director for several conferences throughout.

Summary
Nathan is now married to his wonderful wife Gelsy Pena Salter whom they serve in the kingdom together. Nathan’s powerful simplistic teaching and music has caused him to cross racial and ethnic barriers and allowed him to speak and minister at Black, Hispanic, White and Asian congregations and conferences throughout the United States, Canada, Belize, Dominican Republic & Africa. Whether you looking for Motivational Speaker, Dynamic Minister, Life Coach or Musician, Nathan is passionate about making sure lives are changed, encouraged, motivated and uplifted.

Things that make us proud

With analytics tools, to help you share with current and future clients.

All services for our team of industry experts, personal training.

Total collections, quoting, enrollment, and reporting in Italian and English.

We can help you set up and manager your groups if you are become our partner.